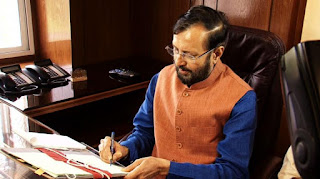 Our ex-HRD minister, Smriti Irani was quite a familiar face, all thanks to her acting career but how many of you know as much about our new Human Resource Development Minister, Mr. Prakash Javadekar? Well, if you don’t then read on to find out all about him.

Javadekar, born on 30th of January 1951, has an honours degree in B.com. Currently heading the HRD ministry, he is a Member of the Rajya Sabha from Madhya Pradesh. The Bhartiya Janta Party politician has handled various departments in the past. He has been the Minister of State (IC) for Environment, Forest and Climate Change, Minister of State for Information & Broadcasting, Minister of State for Parliamentary Affairs, Member of Parliament – Rajya Sabha from Maharashtra from 2008 to 2014, Member, Standing Committee on Defence from 2008 to 2010 and between 2012 and 2014, Member, Press Council of India from  2010 to 2014, Member, Standing Committee on HRD from 2010 to 2012, Member, Public Accounts Committee, Member, Consultative Committee for Min. of Power, Member, Committee on Subordinate Legislation, Member, Committee on WAQF, Chairman, Working Group on “IT for Masses”, Government of India, President, NOINO (National Organization of Insurance Officers), President, KCKU (Khadi Commission Karmachari Union), Executive President, State Planning Board Maharashtra from 1995 to1999, Member of Legislative Council – Maharashtra from Pune Division Graduate Constituency for 12 years from 1990 to 2002, Chairman, TASK FORCE ON IT, Government of Maharashtra from 1997 to 1999 and President, GLOBE India (Global Legislators Organisation for Balanced Environment).
He has also been the national spokesperson for Bharatiya Janata Party and the in-charge of BJP Economic Forum & Cells related to Economy. He has travelled the world and won several awards including the Sir Purshottam Das Thakur Memorial National Award, for research paper on Rural Development and Banks role in co-ordinated approach.

After being appointed as the HRD ministry, the first thing he stated was, “See, I am a product of student agitation. So, we will always talk with everybody. I think with dialogue in place, agitations don’t happen. There will be no necessity of having (student) agitation”. On being asked about his vision, he replied, “We lack innovation. We have to make our education system more innovative. We have to increase inquisitiveness among students”.