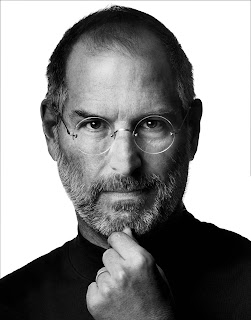 Born on 24th February 1955, to a Muslim father and a Catholic mother of German and Swiss descent, Jobs was adopted by Paul Reinhold Jobs and Clara Hagopian shortly after his birth. The couple adopted their second child, Patricia in the year 1957 and shifted to Mountain View, California in 1961. Paul and Clara showered immense love on both their children and nurtured them well. Steve and Patricia were brought up in a counter cultural lifestyle.

Paul rebuilt and fixed cars as a hobby and as a kid, Jobs admired his father’s craftsmanship. By the time he turned ten, he had grown deeply interested in electronics. While he was considered a loner by his classmates owing to his inability to make friends with kids of his own age, interestingly he had befriended many engineers living in his vicinity. Jobs had difficulty attending the conventional school however he continued with his studies. In Homestead High school, he made two close friends. One was a Homestead High alumnus, Steve Wozniak and the other was his girlfriend, Chrisann Brennan. Both Jobs and Wozniak idolised American singer, Bob Dylan and bonded over their mutual admiration for him. Jobs attended Reed College for a short while in 1972 and soon dropped out of it.
The following year, Wozniak designed a brand new version of the video game, Pong and gave it to Jobs who showed it at Atari Inc. in Los Gatos, California. Atari believed that it was Jobs who created it and hired him as a technician. In mid 1974, Jobs travelled to India in search of spiritual enlightenment and stayed there for 7 months. He donned a shaved head and traditional Indian clothes post returning to US. Jobs began experimenting with psychedelics around this time and shortly after he and Brennan became practitioners of Zen Buddhism. He began meditating for long hours at the Tassajara Zen Mountain Center.

He later joined back Atari and was assigned the task of creating circuit board for arcade video game Breakout. He accomplished the task with the help of Wozniak. Job’s genius counterpart then designed a low cost digital blue box in order to make free long distance calls. The two began selling it later and figured out how profitable the electronics field was. In 1976, Wozniak invented Apple I computer and Jobs suggested selling it. Apple Computer was thus formed with Jobs and Wozniak being its co-founder. Apple II was introduced by Jobs and Wozniak in the year 1977 at the West Coast Computer Faire. This was the very first consumer product sold by the newly formed company Apple Computer. It was well-received and became the first successful mass-produced microcomputer product.

Jobs soon unveiled a new kind of computer that he named Apple Lisa. The name was taken after his illegitimate daughter, Lisa. The company flourished and Jobs became a millionaire. He earned a net worth of over 100 million dollars by the time he was 25 and was enlisted in the Forbes list of nation’s richest people. In the year 1984, Apple came up with Macintosh however it was rather expensive and thus a hard sell. Eventually, a series of arguments and disagreements between Sculley, the President and CEO of Apple and Jobs led to the later resigning from Apple along with five of his senior employees.

Jobs then went on to work upon his new venture, NeXT. He founded NeXT Inc. in the year 1985. He was funded by billionaire Ross Perot. The NeXT computer was shown to the world in the year 1988 in San Francisco, California. The NeXT workstations were released in 1990 however these were largely dismissed owing to the fact that these were highly priced. The revised version, NeXTcube was released later the same year. The innovative NeXTMail multimedia email feature of this interpersonal computer was known to be its biggest selling point. Meanwhile, Jobs also assisted in developing the visual effects industry. Pixar’s first fully computer animated movie Toy Story was made possible partially because of the financial support rendered by Jobs. He went on to become the CEO and the biggest shareholder of Pixar Animation Studios. He also became a member of the Walt Disney Company’s board of directors after its acquisition of Pixar.

On personal front, Jobs married Laurene Powell in March 1991 in a Buddhist ceremony. Their first child Reed was born in September the same year. They had two more children – Erin who was born in 1995 and Eve, born in the year 1998.

In 1997, NeXT was acquired by Apple Inc. and Jobs became its CEO yet again. He then worked closely with designer Jonathan Ive and developed a series of products including the iMac, iTunes, iPod, iPhone, iPad, Apple Stores and iTunes Store in the years that followed. Mac OS was also refurbished into Mac OS X based on NeXT’s NeXTSTEP platform.

In October 2003, Jobs was diagnosed with cancer and he died eight years later on 5th October, 2011. Jobs continued working even as health issues began taking a toll on his life. No wonder, he has several accomplishments to his name.