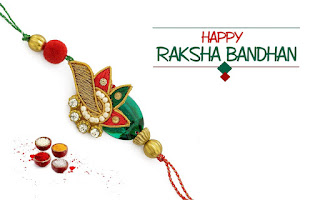 Raksha Bandhan is a Hindu festival that falls in the month of Shravana as per the Hindu luni-solar calendar which usually falls in the month of August. Celebrated in various parts of India and Nepal, Raksha Bandhan literally means the ‘knot of protection’ and this is exactly what the essence of this pious festival is. It celebrates the loving bond of brothers and sisters.

Raksha Bandhan – The Celebration of Love

On this day, a sister ties a sacred thread known as rakhi on her brother’s wrist wishing him all the happiness, health and success in life. In return, the brother gives her a gift and swears to protect and take care of her under any situation. Aarti is performed and prayers are said before tying the rakhi. The sister also applies a tilak on the brother’s forehead and then ties the rakhi. This is followed by the exchange of sweets between the two.

The celebration is typically held during the morning hours and both the brother and sister observe fast until the rakhi is tied.

The celebration does not only affirm the bond between brothers and sisters but also strengthens the family ties as it is also celebrated between cousins. The aarti and tying of rakhi is usually followed by brunch in most families where in all the members have a good time together.

Sisters who are geographically separated by their brothers send them rakhis via post.

Though a Hindu festival, Raksha Bandhan is also celebrated by Sikhs and Jains. Though Raksha Bandhan is not a lavish affair such as Diwali wherein a number of rituals are performed however the girls/ ladies often begin with its preparation days before the festival. The markets are all filled with a host of colourful rakhis and gifts. Some girls even go for a fancy bracelet or a wrist watch for their brothers.

It is also the occasion to get dressed in fancy ethnic clothes and women being women how can they let go of the chance to shop? So, most women shop for new clothes and accessories for the occasion. While earlier the sisters used to take get a box of sweets along with the rakhi for their brothers these days these have been replaced with chocolates, cookies, juices, pastries and other such stuff. This is another reason for the girls to explore the market and shop. Brothers also go shopping to buy gifts for their sisters.

Legends Related to the Festival

The observation of this festival dates back to the ancient times. The Hindu scriptures are full of stories about the Raksha Bandhan festival. Here is a look at some of these intriguing legends:

Raksha Bandhan 2018 is on the 26th of August. If you haven’t started your preparations for the same then begin now!