Do you know the story of JEE Main 2015 high scorer Saksham Jindal ?

The JEE Main 2015 result has been declared by the Central Board of Secondary Education (CBSE) on April 27, 2015. A tough question paper this year ensured the cut-off for the advanced examination this year came down by 10 points to 105.
Over 1.5 lakh students have qualified from all over the country for the advanced exam to be held on May 24.
As the candidates’ scores have been revealed out of the total marks of 360, all eyes are on the top scorers of this highly competitive engineering exam taken by more than 13 lakh engineering aspirants.
We bring to you the success mantras of the high scorer. Who have cracked the most sought after exam for the next step, JEE Advanced, dated May 24, 2015. 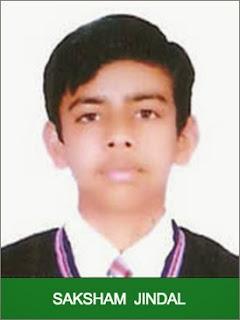 Name:Saksham Jindal
Roll no. : 16300013
State:Haryana
JEE Main Score: 310
He had taken Coaching and Online Study package course of etoosindia.com
And also followed the syllabus thoroughly for the JEE Main preparation. He also referred to NCERT books and is doing so for JEE Advanced as well. He added that, it is just because of JEE Video Lectures of etoosindia.com that I am able to score such good marks in JEE Main. I also practiced JEE Mock Test Papers which were available free on etoosindia.com website.
Online Education of etoosindia.com is a very systematic study source, one can get overall experience of Classroom in these Video Lectures, which saves time & money, said “Saksham”

Hard work, determination and proper planning have also been the success mantras for Saksham. Saksham followed a systematic study regime by attending 3 hours of coaching daily and did 6 hours of online self-study.  He used to put 8 to 9 hours every day for JEE Main preparation. He is following the same strategy for the upcoming JEE Advanced as well.
Apart from studies, he enjoys playing games & listening music. In spite of his hectic study schedule, he took out some time for these activities which kept him refreshed for preparation.